Between me and you is the “and” – it is spoken language that connects people to one other. And it is also words that separate them – if the “and,” for instance, were suddenly to disappear. “Chinese whispers,” known in German as “Stille Post” and in French as “téléphone arabe,” is a kindergarten game that illustrates our dependence on language more clearly than any linguistic theory. One person secretly whispers something into his neighbor’s ear, and he conveys what he has understood to the next person, and so on until – at the end of a long row of people – the last person hears something that, thanks to misunderstandings and misinterpretations, no longer resembles the original message.

In her project for skulptur projekte münster 07, Suchan Kinoshita re-enacts this childhood game, selecting sentences from illustrated magazines or writings of various philosophers and language theorists as well as asking speakers commissioned by her to invent their own sentences,. Other participants include so-called “disrupters,” who deliberately alter the phrases by translating them into other languages. With sensitive recording techniques, Kinoshita eavesdrops on these “Chinese whispers,” powerfully illustrating how the spoken word is subject to continuous change. In the Münster Chamber of Commerce, visitors can hear the resulting sound loop twenty-four hours a day without interruption. The large window in the showroom provides a full view of the street outside, which will almost automatically become the focus of the listener’s gaze. But standing in this open space, his ears entranced by “Chinese whispers,” he will have the chance to reflect on Wilhelm von Humboldt’s assertion that there is no escape from the circle drawn around us by our language.

The artist, born in Tokyo, is a crossover artist, in the truest sense of the word. In installations, actions, model-like architectures, and films, she experiments with what seemed to have been clearly defined. Borderlines and grey tones are her preferred environment. Kinoshita's work in experimental theatre – she was a member of the Krefeld-based, Theater am Marienplatz for many years – has been determinant in her work. Many of her installations are subjected to constant transformations, and, thus, incorporate theatre or performance aspects. Her installations represent spaces of experience, that address the senses. Kinoshita uses neon type, projection, singing, sound, mechanical effects, and ephemeral elements, e.g. dust and soap bubbles. The spectator is invited to participate in complex productions, in part, 'stage managed' through detailed instructions given by the artist. In the Municipal Gallery of Nordhorn/Germany, Kinoshita proceeds beyond the penetration of visual arts by the theatre. In the auditorium, in a theatrical setting, she exhibits 200 people. The visitor to the exhibition enters the darkened hall by the stage and thereby becomes part of an interplay between being shown as and looking at an exhibited work of art. In many of her films, Kinoshita explores the borderlines between dreams, imagination, and reality. In her installations, she uses superimposition or the interplay between live-transmission, film projection, and framed realities, to experiment with different levels of reality. Other installations consist of wooden, sometimes sculptural sheds, that provide space to no more than one occupant at a time. As architectural structures, within the architecture of the museum, these projects intervene into the field of tension between the public and the private. 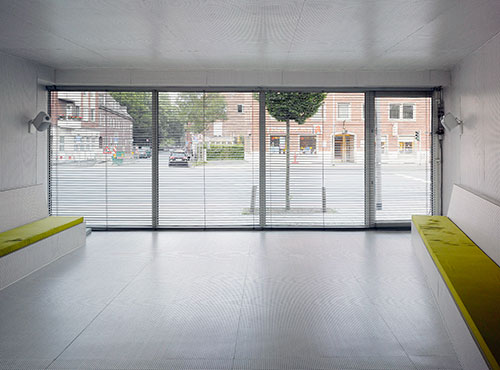