A tokonoma is a built-in recessed space in a traditional Japanese room in which items are displayed for artistic appreciation. Derived from the concept of the personal Buddhist altar, it has become a standard domestic feature with a decorative purpose. One only enters this space in order to change the display following a strict etiquette. Toko literally means "raised floor" or "bed", while ma describes the gap, space, or pause between two structural parts. A tokonoma is not created by compositional elements, but rather refers to one's consciousness of place and awareness of form and non-form. It creates an experiential space emphasizing the interval, the in-between.

Tokonoma operates as an archive as well as an exhibition, bringing together varying working methods, processes, and works. Beside the notion of collaboration, it allows an approach towards performativity and the timeline of a show beyond singular events. Influenced by her study of musical composition, Suchan Kinoshita has been concerned with the possibilities of integrating time as a structural part of a total entity throughout her career. In relation to other artistic strategies and interpreters, she uses Tokonoma to destabilize claims for completeness via a structural embrace of transformation and change within the course of the presentation. (press release for Tokonoma II, New York, Ludlow 38, 2014) 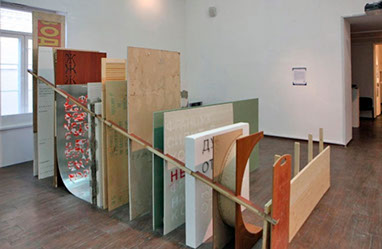 According to Suchan Kinoshita, ‘the notion of being an artist is so loaded with meaning, – says Suchan Kinoshita, – we’re sort of pretentious in a way. I prefer this notion of the musician, the worker, or the dancer. Being perhaps the director or the creator of the piece, but also the player.’ In fact, she also wants to ‘move the role of the public into a player,’ and vice versa.

Within the project Detours for Joggers elaborated for the Casino Luxembourg Museum the joggers whose ‘running course’ passed through the Museum’s ‘park-like surrounding’ were invited ‘to include the exhibition space into it as an intermezzo.’ Without altogether interrupting their athletic exercise, they made ‘a shift from the role of jogger into the role of spectator.’ ‘In Public I that took place at the Städtische Galerie Nordhorn, a museum with both gallery and theatre spaces, Kinoshita created a situation where a theatre audience and a gallery audience could coexist.’ Each part of this mixed audience, while still being the public, were players in the eyes of the other. In Sala Recalde (Bilbao) she invited six professional singers with classical training to make a rehearsal in the exhibition galleries: while proceeding from an artwork to another, they were on the way to improve their singing technique as well as to evolve into art-lovers. The interactive installation made for the Impossible Community project gives a good idea of Suchan Kinoshita’s artistic personality. The diagonal of the title is a wooden plank diagonally securing vertical planes of different size, material and colour. Those vertical planes, being the second element of the installation, are, precisely, the dialemma, referred to in the second part of the title. Each plane sets aside a small section of space, an exhibition space of a sort. Still, the plane itself forms a façade, which is as well exhibited. The planes are fixed in grooves, which are too small to secure the hold, – this stage of a sort, with quite a range of theatre backdrops, is ready to collapse in any moment and mix up all spacing and spatial planes. At last, the third element of this work is the voice reading quietly one of the short stories by Daniil Kharms. The text resounds in different languages; with each translation based not on the original but on a previous translation, misinterpretations accumulate, like in Chinese whispers game. Kinoshita’s anarchist art aspires to blur the lines between traditional roles in the creative process, between different disciplines and spaces, and to draw together viewing and acting, the message and its translation. She produces new meanings in some place or another only to initiate a ripple effect that should create new meanings in new places – those beyond the artist’s control