We are moving on from a century in which the radical in the arts largely adopted principles of separation, negativity and disruption as strategies of change. Based on oppositional thinking, such modernist principles proved tenacious and acted as a default criticality in a world in which the drive to progress became more complicated and the consequences more ambiguous.

A changing reality is apparent in a renewed attention to how things connect – how we relate to each other and to the world we inhabit. Art is a part of this growing awareness. Where once there was an emphasis on alienation and distance, there are now concurrent shifts of thinking that are informing the work of artists and writers across the world. These shifts – incipient and partly unformed – are only now beginning to be acknowledged, but are of real significance.

In the arts, as elsewhere, analytical reflection has led to an understanding that human beings are highly dependent upon our often overlooked relationships with others and with our common world. While this connective model is still embedded in a few societies, established western cultural patterns have tended to emphasise the fragmentation and isolation of the individual. As a result, there are relatively few remaining models of participatory forms of perception and sensibility. A reciprocal relation calls for a profound re-evaluation and the development of new models of working together within our changing reality. One of the things that art can do is to allow us a space for such attention – for thinking together that is open-ended.

The 18th Biennale of Sydney focuses on inclusionary practices of generative thinking, such as collaboration, conversation and compassion, in the face of coercion and destruction. With the creation of conditions for an encounter in consonance with our surrounding world, this event brings emphasis to what is already happening at large. Drawing on the possibility of the present, the Biennale emerges from the engagement of all participants by using a model that begins with two curators in dialogue. This matrix of conversation extends to both artists and audiences in a multi-vocal correspondence.

all our relations relies on these various exchanges, affinities and empathies as its dynamic structure, the vascular and cellular structure and sinew of a kind of living, breathing organism, from which the Biennale’s meanings grow. Artists work in a context that allows for mutual recognition and audiences from differing backgrounds are part of this continual development, finding their own direction in these connections. It is in this altered attention to one another, in the meeting and making of ideas together, that constructive consequence can follow.

In seeking conjunctive energies, this collaboration has taken place on many different levels: in co-existence, conversation and juxtaposition but also in purposeful connectivity. Within this framework of mutuality, recognition and thoughtfulness, disparate ideas – some distantly and some closely related – are brought together in an exhibition process of composition; much akin to the process of thought itself. Artists, who can often feel isolated in their practice, come together with neighbouring artists. Rather than one work appearing to link to one or two other works, an attunement between all creative impulses takes place in time. Projects correspond as if evolving from each other and progress through the sequence of venues and buildings. This interconnection and interdependency occurs in the knowledge that audiences will take elements from the exhibition and connect them with their own experiences. In this shared space, the meaning and consequence of the artists’ works is engendered.

all our relations has its roots in storytelling as it is currently being re-imagined, as a coming-into-being in relation. In the reciprocity that is storytelling, both teller and listener inhabit the space of the story. Telling stories connects us and allows us to care, to be: it fosters collaboration; it aggregates knowledge and generates new ideas; it ignites change; and, ultimately, it builds community. In this matrix, the different projects can be compared to a set of storylines, which artists, curators and audiences relate and translate. Through this process, a collective composition or new Gesamtkunstwerk is accomplished in the active generation of meanings realised by all those who take part, each taking their stories home and beyond … 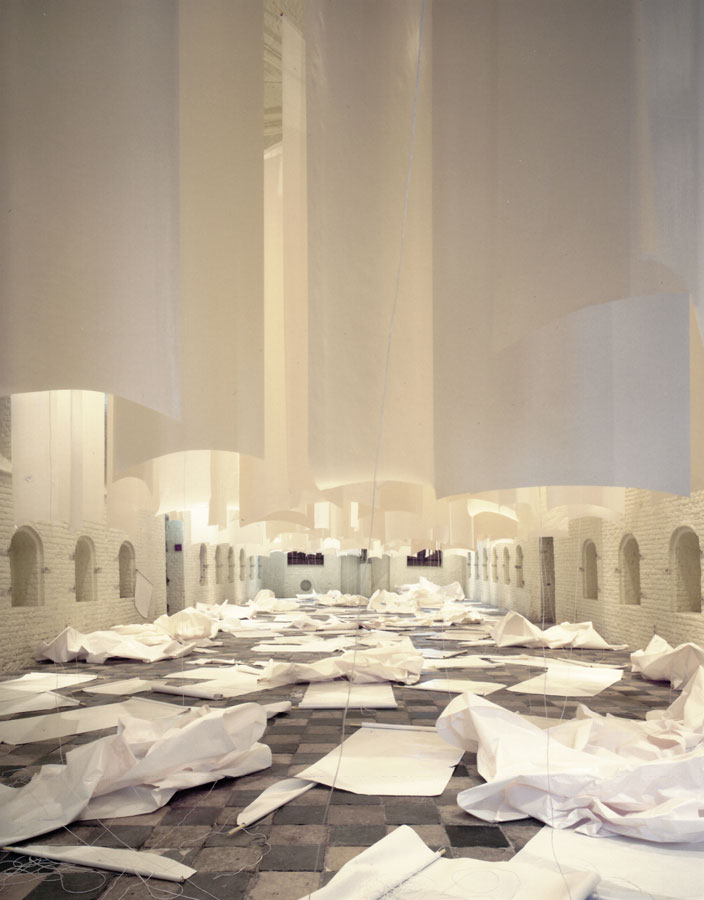 Honoré d’O’s sculptures, videos and installations create participatory scenarios involving the audience. Using down-to-earth materials, d’O evokes a situation that subtly and potentially brings about small changes in how people look at and react to everyday things. His installations are informed by underlying meanings and connections that constantly merge life and art and vice versa. The method he uses is to take the work of art out of the usual prescribed framework and to integrate it in the outer environment. The artist then invites the audience to interpret the work. In this way, the artwork puts the viewer in front of a question that needs to be answered, setting in motion complicated machinery of actions, reflections and emotions.

Since ‘tomorrow’ is a real product and time is pushed to become a trading technique, the lyrics of life hardly escape the machine of functions. Our inversed freedom easily throws words in the infrastructure of humanity, though an operational soul only discusses art as a condition. A hot plot for behaviour won’t endanger oneself if air could squat down in the inner topologics of our derelict environment. Air and inner! A longing wave configures the fl ux of vice-versas between the subject of the constituent and the horizon of the clause, to synchronise a vision with an experience. In that scenery, according to a reflective tradition that can be tracked back to Aristotle and to the never-written deeper down, the project mirrors its contraject: urgent inner commanding implants mental investigation in the vertical subject of ‘the open body of art’, textualises more mythological alchemy, generates wind philosophy and sacroabsurd grammar, before climate and culture will apply our senses into purely social need. During the authorisation of a linguistic constellation – if classic drama forced me to choose: I’d prefer the tongue and split the ear. For humanity: little alternative. For the eye: no relevant pseudonym. For the air: extra inner.