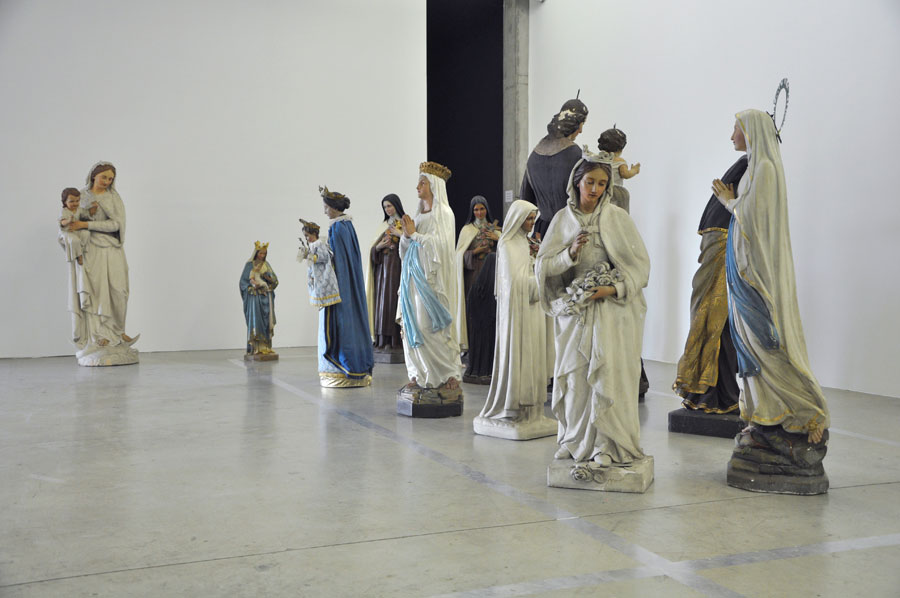 The “Art Make-up” series illustrates the increasing influence exerted on the cultural sphere by the fashion and advertising industries, which have emptied it of all content, only to impose their imperatives, while at the same time expressing their pretension to be elevated to the level of artistic creation. Sophie Langohr has unearthed from the reserves of a museum, the museum of Fine Arts in Liège in this case, a couple of Marian statues in the Sulpician tradition, which today seem to represent the purest form of religious kitsch and the beginnings of a semi-industrial art. The artist confronts their antiquated faces to those gleaned on the Internet of current muses that embody the major brands in the luxury industry. Presented as diptychs, these transfigurations plunge us into the illusion of a particularly daunting cinema-photo-digital aesthetic. These are her “New Faces”, and the resemblance is astonishing. These polychrome Virgins have been put under a digital scalpel of extreme precision. To my left, some fifteen figures of statues of the Virgin or saints: close-ups of an equal number of angelic and antiquated faces. To my right, the same figures, in much more fleshy incarnations, with painted lips and sophisticated makeup under controlled lighting. These are mirror portraits that evidence a disturbing mimicry, as if reality was made to reflect the image of art. Reality, indeed, because we are not entirely unfamiliar with these portraits of women. We may recognize Anouck Lepere or Marion Cotillard, Emily di Donato or Sacha Pivovarova, these actresses and models whose faces of glossy paper occupy the front of the media scene.

This time, they are not anonymous models, but the Muses of a series of major brands of perfumes, cosmetics or leather goods, new faces of advertising, which she confronts with the physiognomy of one of the probably most mediatised faces in the history of art, that of the Virgin Mary, the Immaculate. With a consummate art of retouching, the same, moreover, as the one practiced in the world of fashion photography, she has highlighted the similarities to the point where the faces blend together, models and actresses now transfigured into Virgins, leaving, here and there, like a careful restorer, some clues as to her multiple interventions. Transfiguration and miracles here originate, in keeping with the times, in image processing software, in a graphic palette.

« By itself, notes Mona Chollet evoking these “fatal beauties” , the term “muse « that has emerged in recent years, is symptomatic of the shift that has taken place: an actress is no longer the inspirer of an artist – which, by confining women to the silent role of muses, reducing them to their mere photogenic and sensual qualities, could already be annoying –, but of a brand or a product, whose aim is thus ennobled, as it basks in the glory and mystery of creativeness. And advertising is no longer a scourge that we suffer and flee from, but rather a full-fledged cultural production that we are supposed to look for and await.” Indeed, advertising for luxury and beauty has to be “arty”. Advertising clips for perfume, cosmetics, or luxury leather products must have a branded editorial content, a “brand content”; they combine advertising and entertainment. The creation of these clips, moreover, is entrusted to creators, and not the least important ones, rather than creatives. When Marion Cotillard appears for Dior, it is to Olivier Dahan, for whom she played La Môme Piaf, or to David Lynch, John Cameron Mitchell, Eliott Bliss or Jonas Akerlund that Dior turns for the production of these films that have acquired the status of both full-fledged short films and super productions. By transforming these muses into Virgins, Sophie Langohr takes this logic further: who better than the Virgin Mary to incarnate the glory and mystery of creation, transcendence and ascension (or rather assumption)? She is definitely timeless, embodying reference, code, standard, affect, guardian figure, history, ritual and cult, all of them notions the current fashion communicators obsessively pursue. So here we have Kate Moss for Rimmel, Barbara Palvin for Chanel, Raquel Zimmerman for Shiseido, Adriana Lima for Maybelline, these fashion icons, new faces of the great Icon, of which Mary, Mother of God, is in fact the most perfect embodiment.

Cult object on the one hand, object of worship on the other, Sophie Langohr has not selected just any Marian statues. These sculptures are all fairly recent; they date from the late nineteenth century to the early twentieth. They are all in the Sulpician tradition, the oh so discrediting moniker for this confused blend between widely distributed reproduction and authentic sacred art, inspired by the lessons of the German Nazarenes, the English Pre-Raphaelites, or the teachings of Ingres. In the literal sense, the art of Saint-Sulpicius refers to the objects that are sold in specialty shops which adjoin the eponymous church in Paris; it is in some way a forgery of artistic creation, an industrial and economic art, of poor quality, whose mawkish and bland style in some way reassure and bear the mark of an official, canonical and modest art. Is this far removed from the current situation? “Meanwhile, without anyone noticing it, notes Marie Cholet, our vision of femininity is increasingly reduced to a handful of mawkish and conformist clichés. The hardness of the times surely bolstering the temptation to fall back on traditional vocations: being a mother and being beautiful”. ”The stars that emerge, she adds, are now all calibrated on the same model: extreme thinness – or tolerable curves – diaphanous complexion, sophisticated wardrobe … Once their transformation into smooth, bland and interchangeable coat hangers is successful, they can hope to arouse the interest of one or several brands of cosmetics or clothing. The game is worth the candle: if they succeed, they hit the jackpot, both financially and in terms of media exposure.”

The Sulpician art develops at a time when the Catholic religion aims to be accessible and popular. It glorifies Joseph, The Magdalene and contemporary saints. The role given to Marian piety, following the apparitions of Lourdes and La Salette, the establishment of the dogma of the Immaculate Conception, enacted in 1854 by Pope Pius IX, is exemplary. All these devotions, such as for instance the one of the guardian angel, all these traits of religiosity have obviously marked the Sulpician iconography. It aims to inject hedonism into religion, to make it pleasant; Paradise is well within reach. The parallels that can be drawn with the consumerist logic whose “New Faces” by Sophie Langohr are the real muses, rather than the products they represent, are therefore striking. It is but a step from the one devotion to the other. Outside of the standards dictated by the hedonism promoted by the fashion and beauty industry, there is no salvation.

Finally, there is this cut of the digital scalpel, this cosmetic surgery of the image. It obviously evokes the imposition of a stereotyped feminine image, the trivialisation of a surgical transfiguration, the sufferings and abuses that are its corollary, the violent maintaining of unattainable standards. With precision, Sophie Langohr points outs this obsessive sublimation and ruinous spiral, this dark and devastating sense of guilt, the mortification of the body that is seen as disenchanted. Beyond the “arty” claims of the beauty industry, these pairs of icons stand for a fundamental ideological questioning of the image of women in our society, subject to the obsession of appearance. The topic, set against these Virgins with clear eyes and swooning air and these sophisticated muses, seems subtly trenchant, it must be said. 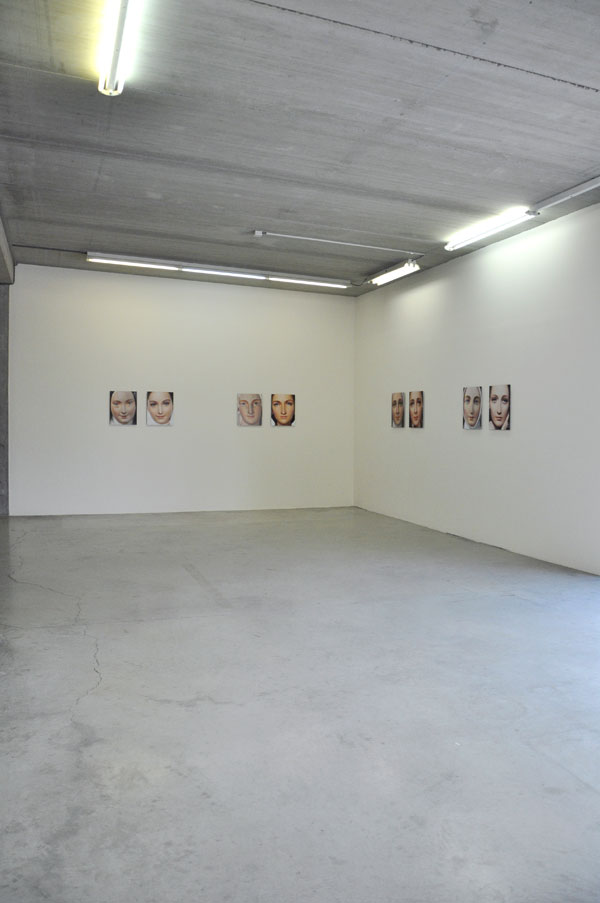 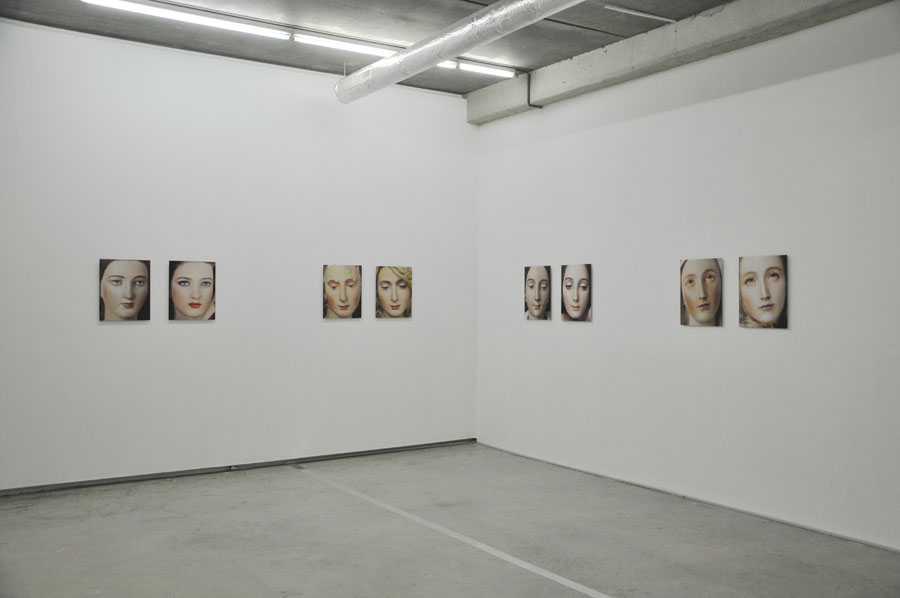