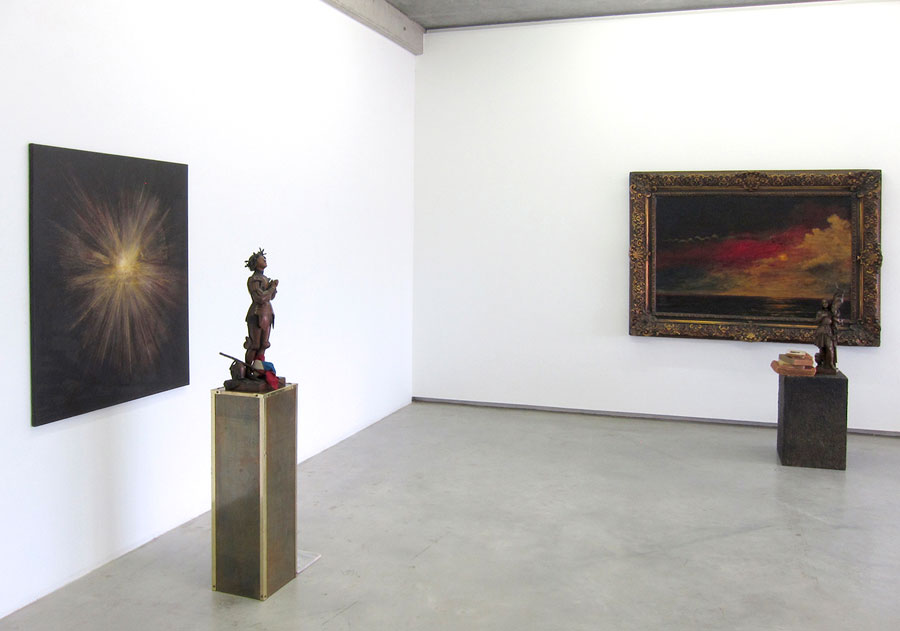 Intercessor of the Saints? Jacques Charlier, is hardly a first timer. In a cycle that brings together “religious paintings” and “mystical paintings” (1988), the artist presented the most famous shepherdess of France on a pedestal: Joan of Arc; of course, I should say St. Joan of Arc, since she was canonized in 1920. It is also intriguing to note that it was Leo XIII, the one who canonized Rita, who initiated the procedure for the canonization of Joan of Arc, declaring at the signing of the introduction of the cause: “Jeanne is ours.” Indeed already. Charlier sets out in search of plasters and bronzes representing Jeanne, with or without standard, on foot or on horseback, in hieratic pose or launching into battle, clad in armour or helmet at her feet. And considering his harvest, Jeanne must have camped out on many an urban or country home sideboard. He collects old books, biographies full of voices and noise, dusty hagiographies, various objects, a cup with fake grapes, spears, a kitschy portrait of the haloed Saint. His own paintings are deep; when they are not nocturnal, they are occupied by immense skies. In these various compositions, which sometimes reveal a hint of esotericism, like a quaint taste of gothic revival, factitious, theatrical and dramatic, reigns a strong sense of dark romanticism tinged with symbolism. These associative devices, which transfigure the remnants of the history of taste into relics, approach the mystery, its transcendent and indistinguishable realities. Jacques Charlier is definitely a stylistic chameleon. The darkest of all is also the most luminous: a spear point is placed against the canvas, touching a celestial sphere that tears the mass of clouds apart. I think of the redundancy of the ”Nuit obscure” (Dark Night of the Soul) of the mystic St. John of the Cross, of the first line of the poem: « By a deep night, Full of anguish and inflamed with love… ». Darkness and night are not only synonymous with danger and fear, but also with dream and mystery, domains that are both ambivalent and attractive, that either lead to the abyss or to knowledge. In this cycle of “Mystical paintings”, Jacques Charlier combines history, myth and the legacy of folly, in fact, the very essence of the religious-political destiny of the image of Jeanne, a figure considered evil by Shakespeare, burlesque by Voltaire, feminist by the suffragettes. Condemned by the Church which will later rehabilitate her, digested by the various modes and schools of thought, romantic myth that has inspired many works in all the arts, instrumentalised figure appropriated by all philosophical movements. The image of Jeanne is so bipolar that she came to embody the “secular Saint”, a pinnacle of the genre, before being hijacked by the darkest possible nationalist obscurantism; here also, redundancy is required.