MUHAVERE/ CONVERSATION focuses on the profession of the Karagiozis player and his role as a translator of the Cypriot political reality in the twentieth century.
More specifically, the proposed project is an installation consisting of a video projection and an archival presentation, a vitrine consisting of Shadow Theatre figures refering to events of modern Cypriot history.
The video projection (duration 21 min 56 sec) shows parts from a videotaped critical discussion (total duration of one and a half hours) between the archaeologist-historian Anna Maragou and the karagkiozis players Taki Hadjittofis, Paphia Christodoulos Antoniou, Thodori Kostidaki and theater director Euripides Dikaios. The selection of the panel, the organization and recording of the discussion took place in January 2014 in Nicosia Municipal Arts Centre.
The videotaped conversation between the Cypriot karagkiozis players is part of the project “Oh, For Some Amusement!”. The project examines the changes in the relation of creator-spectator during the transition of entertainment media, from traditional participatory forms of entertainment such as the theater of shadows, to the domination of cinema and video, which coincides with the transition from the Ottoman Empire in the composition of autonomous states after the fall. 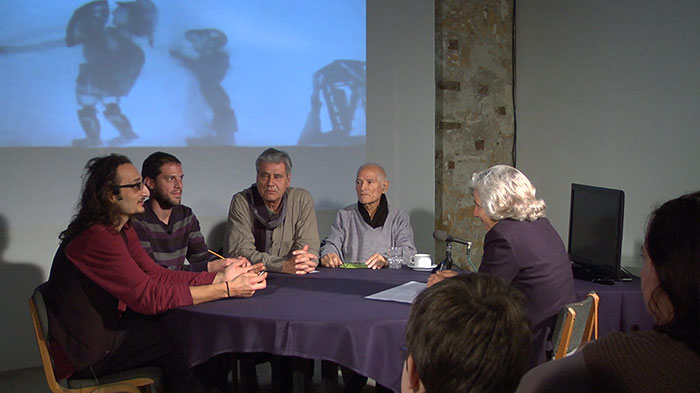 The Nicosia Municipal Arts Centre ‐ Associated with the Pierides Foundation [NiMAC] and the Cyprus Ministry of Education and Culture, Cultural Services, in collaboration with AHDR (Association for Historical Dialogue and Research) and SIDESTREETS Foundation, announce the opening of a new exhibition project entitled Treasure Island on Friday, 26 September 2014. The project features visual works, performances, public discussions, interventions and other events selected through an Open Call, next to a number of preselected works.

Treasure Island seeks to expand discourses of the past in Cyprus. It seeks to shed critical light on dominant modes of historical representations, and address those stories that have been subjugated, manipulated or silenced by hegemonic historical discourses and artistic, literary or theoretical practices. Moreover, the project aims to underline the broader meaning of the political in art, in the local context: On the one hand, as a drive for critical (re)negotiation of the modern history of trauma, conflict and violence, as well as of any totalizing ideological strategies of approaching, thinking and narrating the past, particularly in relation to national or cultural identification. On the other hand, as an attempt to deal with a broad spectrum of crucial issues that affect Cypriot society, beyond the Cyprus Problem. Ultimately, the project aims to bring forth the culturally inconspicuous, and the latent patterns of Cypriot historical experience, both in the colonial and postcolonial contexts.