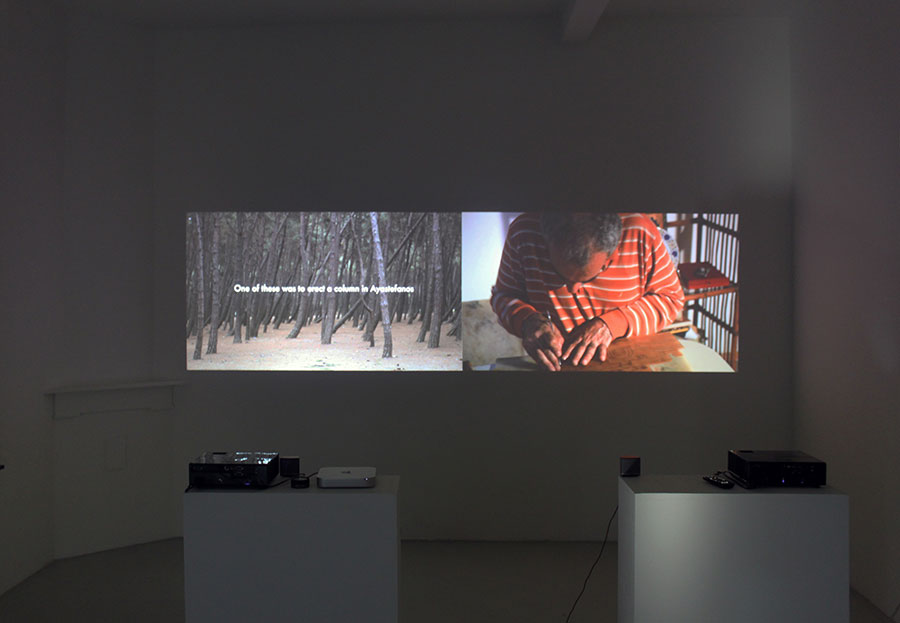 In residency in Istanbul at the time that the protest movement symbolized by the occupation of Taksim Gezi Park was growing, Eleni Kamma was exploring another park of the Turkish capital in the Bakırköy district, namely Florya Atatürk, near to Yeşilköy, or “the green village”, “a charming little town on the Marmara Sea, full of harmoniously restored wooden houses”, as describe the tourist guides. Three spires mark the horizon: the Greek Orthodox Haghios Stephanos, the Armenian Gregorian Surp Istepanos, and the French-speaking Levantine Catholic San Stefano. All three share the same name, and the village itself used to be called Ayastefanos until it was renamed in 1924, as part of Mustapha Kemal Atatürk’s secularization drive.

It was here too that the Russian army stopped in 1877-78, never to realize the Tsars’ age-old dream of taking Constantinople and reconstituting the Byzantine Empire. It was also in San Stefano that the eponymous treaty was signed in 1878 bringing an end to the 93rd Russian war in a convention imposed by the Russian Empire and reorganizing its former Balkan possessions into the Ottoman Empire.

On this occasion, Russia also imposed the construction of a commemorative monument in Ayastefanos: an ossuary monument in honour of the Russian soldier who vanquished the Ottoman Empire. On the decision of the government and the Committee of Union and Progress, this monument was razed by the population of Istanbul on 14 November 1914. The Ottoman armies had been mobilized since 2 September; the Russians declared war on the Empire on 1 November. The destruction of the Russian monument in Ayastfanos was thus the ultimate expression of national dignity. Turkish nationalism born out of the Young Turk Revolution of 24 July 1908 was gaining considerable ground. It progressively won over the political, military and civilian elites and the urban middle classes.[1] At this moment at the start of the First World War it had never been so strong.

After the Macedonian Yanaki and Milton Manaki brothers’ 1911 documentary on Sultan Mehmet V’s visit to Monastir, the very first film in Turkish film history immortalized the “Demolition of the Russian Monument in Ayastefanos”. It was signed Fuat Uzkinay, a naval officer who one year later started working for the Central Army Cinema Department set up on the orders of Enver Pacha, the strong man of the government who, at this time of exacerbated nationalism, was quick to realize the propagandistic possibilities of film. “I cannot but wonder at the strangeness of this gesture, which consists of destroying a monument and immortalizing at as it is destroyed”, the journalist and writer Marie-Michèle Martinet wrote about this film during her Istanbulite wanderings, “as if the image was the materialization of a kind of remorse, somewhere between the act of destroying and of fixing on film the very thing that is being destroyed. Moreover, strangely, the film disappeared after it was shot. To the point that its existence was called into question.” [2]

Eleni Kamma has decided to evoke this first film about the destruction of the Russian monument in Ayastefano. Her own film, a diptych with adjacent images, will thus confront current sites where no signs of the monument’s existence remain, with accounts and evocations of that day on 14 November 1914. Eleni Kamma will ask a hayalî – which in Turkish signifies both “imaginary” and “image creator” – to narrate this account. A hayalî is a Karagöz puppeteer; Karagöz is the traditional shadow theatre named after the first of its two main characters, Karagöz and Hacivat. These plays, in which the shadows of cut-out figures are projected on a white screen, played a primordial role throughout the vast Ottoman Empire. “The plays portrayed, and mocked, the traditions, customs and mores of the capital and the major cities’ particularly cosmopolitan populations”, notes Michèle Nicolas[3]. With the plays’ allusions to current affairs, their criticism and grievances concerning the tyrannical authorities, this theatre served, notably in the 19th century, to voice protest through political satire and humour. It bemoaned the pashas, viziers and beys, all of whom incarnated religious or military power, but were never represented as such, out of respect or fear of reprisals. Karagöz is in fact a kind of mirror, reflecting the thoughts of the people, a performance that expresses what the spectators do not themselves dare express about their moral, social and political preoccupations. “People don’t come to Karagöz”, hayalî Emin Senyer, one of the main legatees of this tradition today, likes to say. “Karagöz comes to them.”

In the very first images of Eleni Kamma’s diptych film, we simultaneously discover both the trunks of dozens of trees that stand like ghostly singular presences in the Florya Atatürk Park, and the workshop of pupeteer Emin Senyer. He cuts up a buffalo skin. He works the leather until it is almost transparent. In his nimble fingers, a monument gradually takes form that looks like a Russian Orthodox church. As he dyes it to create coloured projections, he recounts the Destruction and tells a singular tale, that of Y. Bahri Doğançay, a soldier in the 27th cavalry regiment, who declared to have been the one to rig the explosive device that blew the monument up in 1914. Doğançay, a thoroughly martial figure, evokes the people of Istanbul, who had already taken pickaxes to the monument’s surrounding walls the previous day, the local police commissioner’s astonishment and anger at this regiment’s intervention, the magnificence of the monument, the fuses that he and his fellows lit with their cigarettes, the danger they risked, and the difficulties they had in destroying the building. He finally evokes the government’s indecision, the order given to stop this destruction on the morning of 14 November, the permission finally given to complete the work methodically, and how the monument ruins “now constituted a danger to the population”; the spectacular U-turn of authorities caught on the back foot.

The Karagöz projection lamp is called a şem’a, literally a candle, but is generally an oil lamp. The images are projected on a white muslin screen, known as the ayna, which means mirror. Imagining her work in the form of a double projection, Eleni Kamma plays on this mirror-like set-up. While the trees of Florya Park continue to scroll by, like hieratic shadows, puppeteer Emin Seyner constructs his theatre, this cloth stretched on a frame like a painter’s canvas, ready for the shadow play. When he evokes the monument’s enclosure during Doğançay’s account, Eleni Kamma’s camera films the railings around Florya Park. Other accounts of the event, relayed by the press at the time, back up Doğançay’s epic narrative. The commentary that unfolds on the left side of the diptych, in counterpoint to the narrative told by Emin Seneyr, is based, among other sources, on articles from the Tanin, close to the Committee of Union and Progress, or from the highly influential Tasfiri Efkar. The tone is official, nationalistic and rather emphatic. The Tasfiri Efka details, for example, that the monument’s four bells were transferred to the Military Museum and exhibited alongside another national symbol: the heavy chains that prevented sea access to the Golden Horn during Mehmed II the Conqueror’s siege of the city. As soon as the puppeteer goes behind the screen, ready to bring the Destruction to life, his shadow figures at last ready, Eleni Kamma films another screen, a banner strung all the way across the top of a big Yeşilköy building. Here, a stone’s throw away from the place where the Russian monument stood, a building site is under-way, in construction, the promoter proffering an image of what the final result will be like.

Eleni Kamma commissions the reconstruction of a monument; in cinematic terms, she produces a remake of its destruction. Emin Senyer performs this undertaking. The Karagöz prologue always ends with injunction to have fun; Hacivat indeed traditionally declares as the prologue closes, Yar bana bir eğlence, “Oh, for some amusement”. It is Hacivat who watches and is witness to the destruction of the Russian monument. “With his nasal twang”, Michèle Nicholas again notes, “he is the petty-bourgeois, the village pedant who quakes before authority. Sycophantic to the powerful and affluent, he uses a flowery language, full of erudite words and metaphors. He knows high-society etiquette inside out and displays upper-class moral principles. He is a cold, calculating, opportunistic erudite, the go-between to whom people turn when they need a service or a favour.” A cavalryman and a man on foot enter the scene. The Russian monument is at the centre of the stage; the cavalryman and man on foot finally set about destroying it, in a comical way. And as the Russian monument explodes, its shadow projected on the screen, we learn that, during a meeting with Recep Tayyip Erdogan in 2012, at the very moment that the Syrian situation was at the heart of all political conversations, Vladimir Putin offered his Turkish counterpart to restore the Russian monuments and grave stones in Turkey and the Turkish monuments and gravestones in Russia. Including the Russian commemorative monument in the well-to-do Istanbul suburb, Ayastefanos.

Eleni Kamma’s mirror images go well beyond recalling a historical episode at the start of the First World War. Between the real and imaginary, the play on shadow and light that they reveal, between a lost film, archive sources, popular traditions, social satire, contradictions and political history, the film reactivates memory. The images of the shadow play project us into the real: that of an Istanbul suburb today, that of the world too. For one cannot but think of current protests, of the current dangers of rising nationalism, of the temptations of territorial expansionism, of the situation of minorities, and the shock of cultures and religious conflicts. Eleni Kamma indeed cites the lines of T.S. Eliot: “Between the idea / And the reality / Between the motion / And the act / Falls the Shadow”. (JMB) (translation : Melissa Thackway)