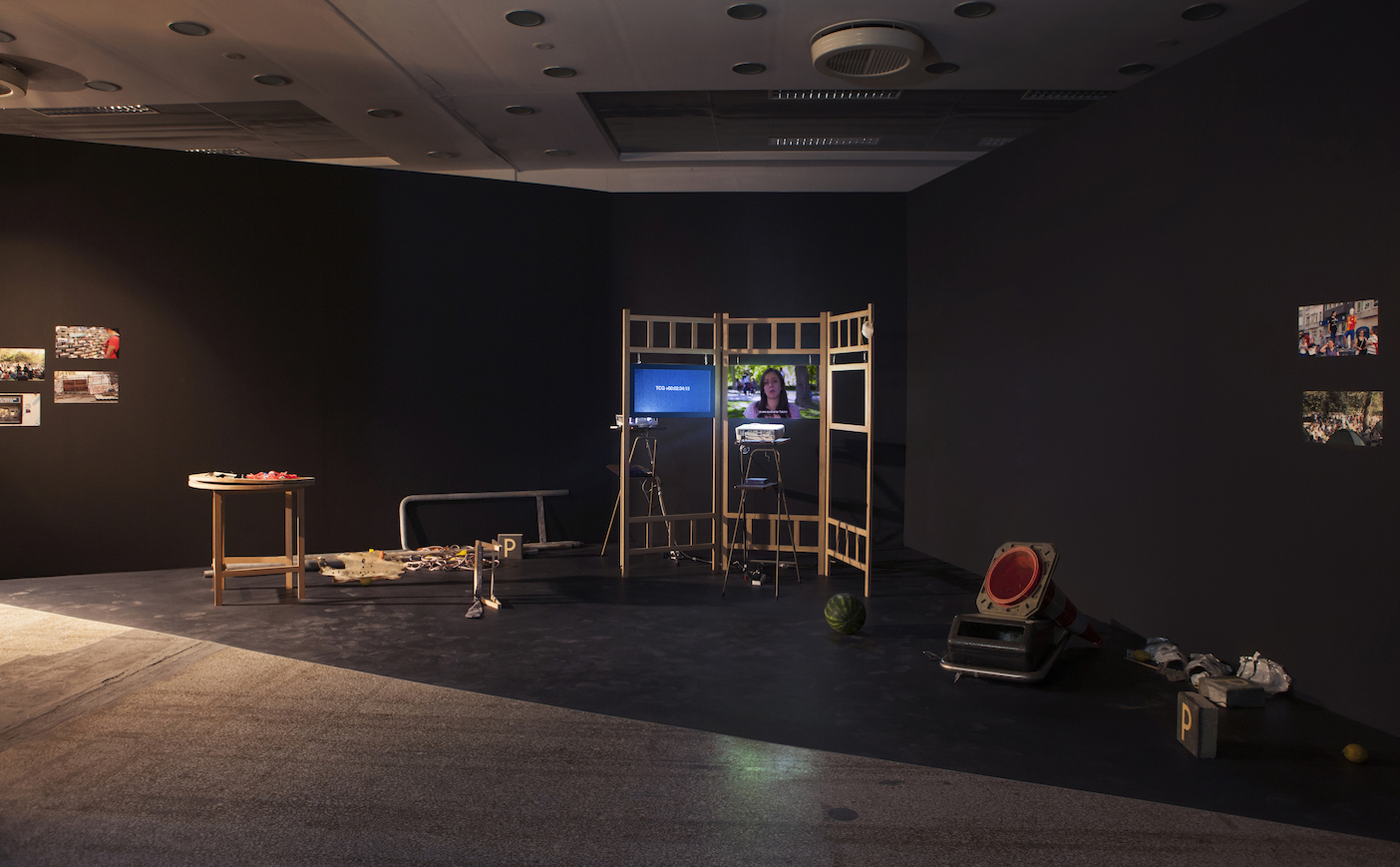 In Parrhesia: courage / breath / speech (2014-2015) Eleni Kamma takes the notion of the Greek word parrhesia (frankness of speech or candid speech) as a point of departure, and relates it to two recent events in the Eastern Mediterranean. One was the protest against plans to turn the Taksim Gezi Park in Istanbul into a shopping mall and residential area. A video shows interviews with young protesters at the Gezi Park speaking on the notion of engagement, citizen participation and humour as a strategy of resistance. A series of photos from the same location zooms in on the use of certain objects as means of protest, such as watermelons, kitchenware, lemons, whistles, dust masks, signs, barriers, etc. It illustrates the visual culture and outlook of the peaceful protestors and shows how they manage to remain optimistic in light of the looming forces of oppression. The second event is former Greek culture minister Panos Panayiotopoulos’ opening speech at the EU-conference “Financing Creativity” in Athens in 2014 about Greece’s cultural policy in the coming decades, which outlined an increasingly neo-liberal view of culture as being something that should be privatised. One can hear the minister formulate the proposed future role of culture in exclusively economic terms, a vision that is indicative of how the Greek state is increasingly abandoning its support for contemporary culture. Stunningly, not a single artist was invited as a speaker to the conference. Given this situation a group called the Mavili Collective (which is involved in producing nomadic, autonomous collective cultural zones in disused urban spaces in Athens) called for artists from different fields to attend the conference. Having been excluded from a dialogue about cultural policies, the artists present at the conference publicly expressed their disdain regarding the proposed role of culture and made a mockery out of the proceedings. The response of the Minister is revealing. It is shown as a video of a black screen showing only the English subtitles for the Greek sound track. The Minister’s response to the artists’ use of irony, sarcasm, and laughter was met with an utter lack of humour, intelligence and imagination, reinforcing the stereotype of the political status quo as being completely staid. Utterly confused by the artists’ reactions, he was unable to come to any conclusion and witnessed how populism was counteracted, and finally smothered by idealism. The videos are incorporated into a theatre-like setting that includes props relating to the practice of protest in public space and highlighting the performative aspect of public, free speech. Ultimately, Kamma probes the deployment of free speech in different contexts, reminding us of the essential role it plays in democratic processes. (Katerina Gregos) 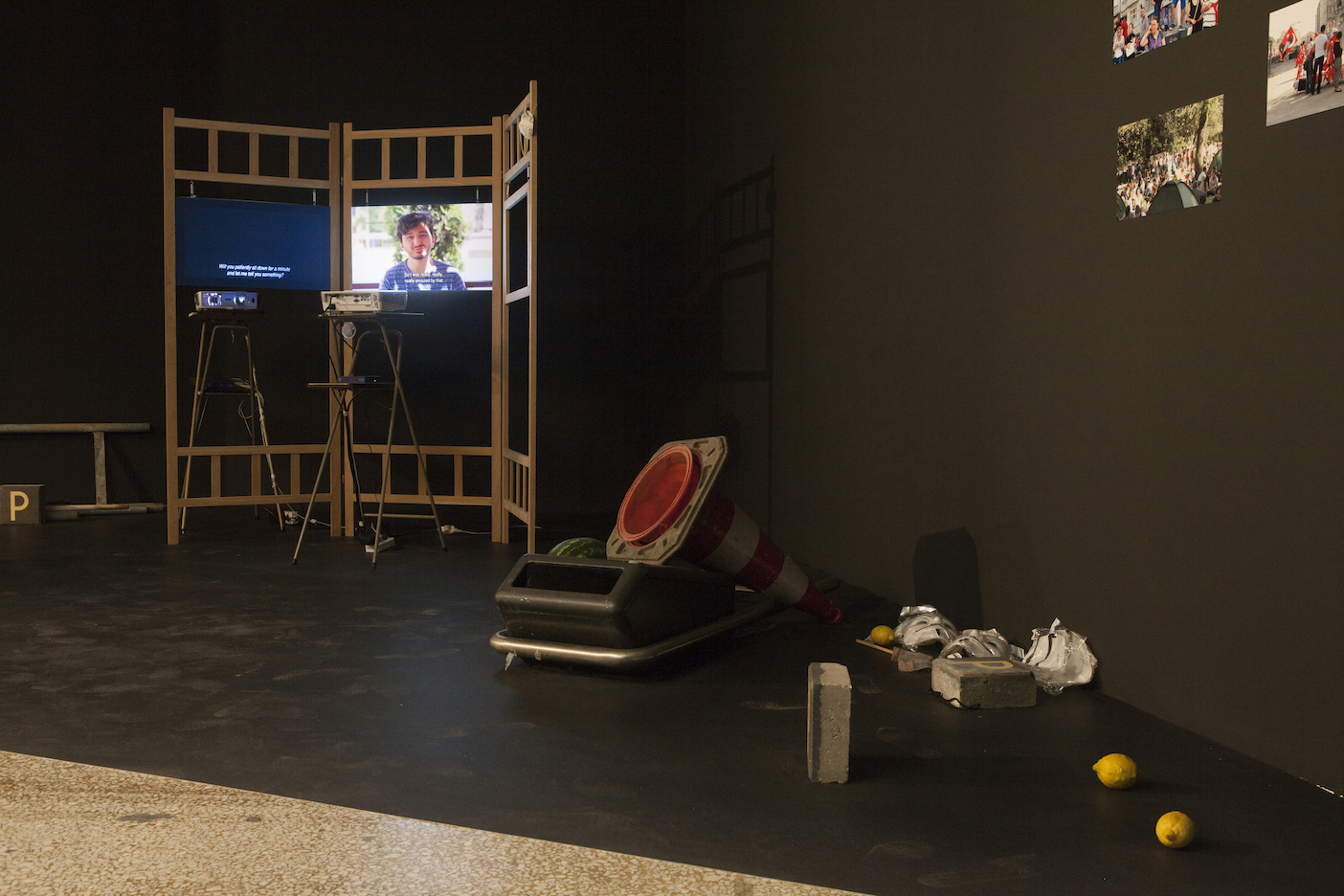 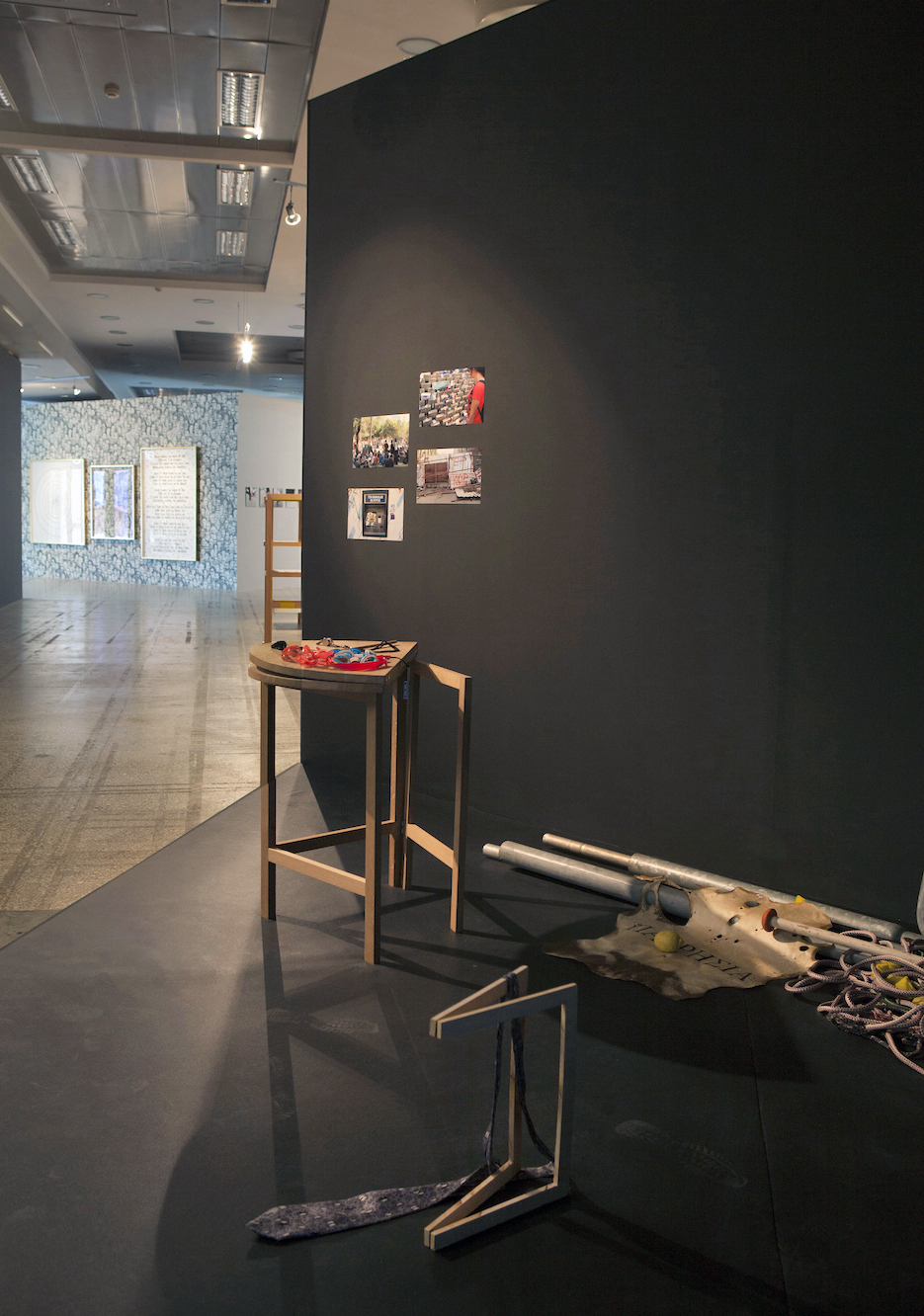