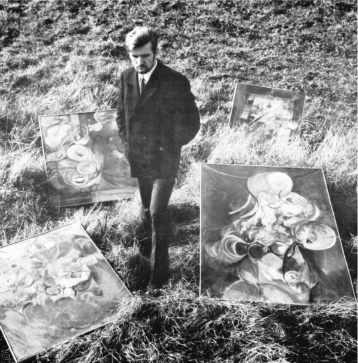 Recently, Magda De Bontridder donated a series of works by her husband, Gilbert De Bontridder, to the Bonnefantenmuseum. In 2017, the annual Gilbert De Bontridder Award will be presented for the twentieth time, at the Maastricht Academy of Fine Arts and Design (MAFAD). The occasion has prompted an exhibition that focuses on the artist and on the recipients and organiser of the award.
Look at me and see what I could not (yet) see presents a concise overview of works by Gilbert De Bontridder in an unusual setting. Nine recipients of his award have adopted fragments of De Bontridder’s work and, through video and sound works, continue where his oeuvre prematurely left off twenty years ago.
The starting point for this collaboration is collage, which forms a central theme in De Bontridder’s work. The artists studied his paintings and writings in depth and found valuable details and shortcomings, or came up against unexpected similarities with their own work. The exhibition is the result of this process of adoption, and in its totality can also be seen as a collage: Cutting, sticking, ruminating and reanimating.
The painter Gilbert De Bontridder (1944 Sint-Genesius-Rode – 1996 Maastricht), who was originally from Belgium, played a pivotal role in the Maastricht art scene, following his appointment as a teacher at the Academies of Fine Art Maastricht, in 1985. On his death in 1996, Gilbert De Bontridder left behind an oeuvre of paintings and collages, some monumental works in Maastricht and its vicinity, and a series of publications and writings on painting. Since 1997, the MAFAD has been presenting the annual Gilbert De Bontridder Award to a graduate whose work operates on the borderline between practice and theory.