Descending from the modernist architectural movement of the early 20th century, Brutalism is an international movement that flourished from the 1950s to the mid-1970s. Often related to governmental and social buildings such schools or high-rise housings, the typical brutalist architecture is rather a massive, fortress-like, construction with a predominance of exposed concrete construction.

In Italy, Vittorio Viganò (1919-1996) is probably the main exponent of brutal architecture. He undertook in 1956 a residential project for the sculptor and architect André Bloc (1896-1966) who is best known to be the founder of the magazine L’Architecture d’Aujourd’hui. Among the best architectures by Viganò, La Scala is a rather small house on a spectacular headland overlooking Lake Garda. It consists of two horizontal concrete planes in which the rooms are shaped by glass separators and it is characterized by a long stairway that connects the house to the banks of the lake. In her new film, Aglaia Konrad combines in a split-screen different views of the villa and its surroundings. Her work should be considered as a form of visual research. Konrad establishes a dialectic between the house’s interior and the lake’s vista, but also between the brutalist style of the house and the enclosing nature. In this way, Konrad succeeds at the same time to do- cument and to provide the viewers with a bodily perception of the Viganò’s oeuvre.

(...) Aglaia Konrad photographed Bloc’s Sculptures habitacles in 2008, and her forthcoming film La Scala, shot in autumn 2015, focuses on Bloc’s house (1956-1958) at Lake Garda, in San Felice, Italy. The house was not designed by Bloc, but by his review’s Italian correspondent, Vittoriano Vigano. It is known as Casa La Scala because of the impressively long staircase that connects the house to the waterfront. Following in the lineage of her previous films, which document the artist’s discovery of a singular building (a ho use, a church, ... ), and which, even if only implicitly, speak of their absent inhabitants, this new film is, simultaneously, a documentary, an artist ‘s response to a building, and a portrait of a project arising from an intimate relationship, familial and/or professional. The relationship between architect and client is thrown into relief, echoed even, by the way the artist explores the building. She seems to insert herself, or her lens, into the space between the two.(...) (Penelope Curtis, From A to K) 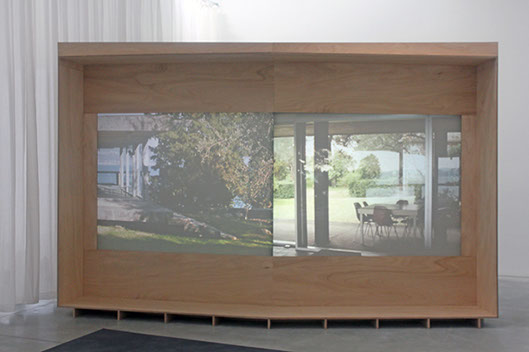