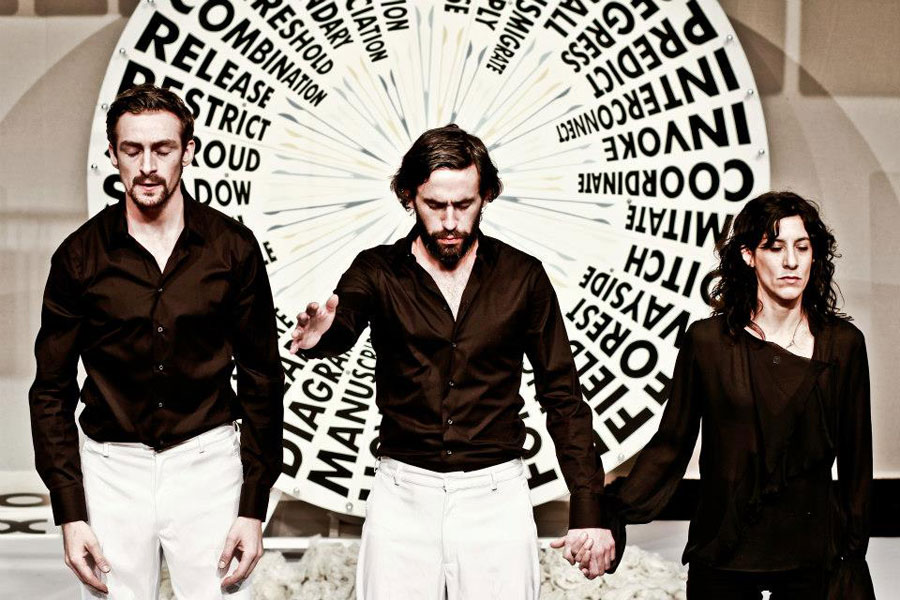 Language shapes our structured world, but in fact every sentence we utter is an improvisation. That is the starting point for the new work, Mountain, of Irish visual artist Orla Barry. She has worked with 57 words, an actor, a dancer and a musician to devise a work in which chance, fate, and a little witchcraft play equal roles in a performance that is never the same on any night. It is a show of shows, set in a décor of language objects, these objects were used to produce the script for the show.

Orla Barry, now shepherdess as well as artist, returns to performance after The Scavenger’s Daughters (2008) with her new knowledge of primal materials and customs to create particular works of art that play with different forms of text production such as speech, monologue, interview, poem or song to create a series of intentionally unplanned crossovers between text, meaning and performance.

Orla Barry’s work focuses on language, both written and spoken, as well as on visual deconstruction and displacement of language; via frequently associative techniques, she researches the semantics of her mother tongue and its cultural imbedding and implications. Orla Barry lived in Belgium for sixteen years and has now returned to live and work in Wexford, Ireland. She has recently had performances at Tate Modern, London; Playground Festival, STUK, Leuven; and De Appel arts centre in Amsterdam. She has also had large solo shows of her work at the CCB, Museu Bernardo, Lisbon (2011, with Rui Chafes); Irish Museum of Modern Art in Dublin (2006); SMAK, Ghent (2005); Camden Arts Centre, London (2005); and W139, Amsterdam (2005). She has taken part in Manifesta 2 and in group shows such as Sense and Sensibility in Sao Paulo and Some Parts of this World in Helsinki. She has been awarded the prize of the Palais de Beaux Arts in the ‘Prix de la Jeune Peinture Belge’ in 2003 and was shortlisted for the Glen Dimplex Prize in 1999.