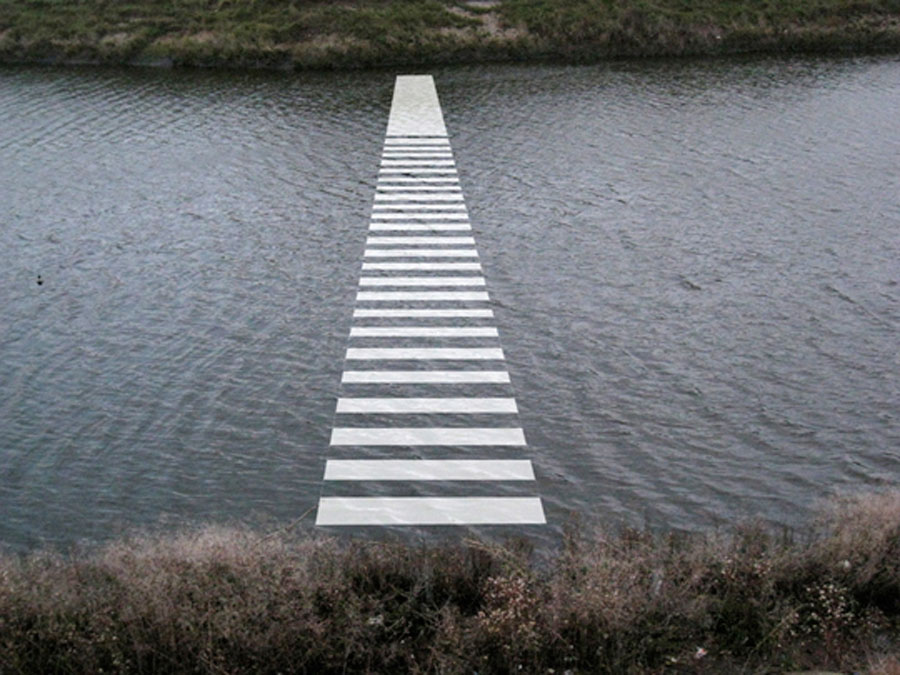 Artsonje Center is pleased to present WANDERLUST: A Never Ending Journey to the Other Side of the Hill from June 23 to August, 2012. WANDERLUST is an exhibition project developed in Belgium and realized in close collaboration with Samuso in Seoul. It is focused on five major Belgian visual artist, among whom some of the most infuential classical figures in Western art history of the 20th century such as Marcel BROODTHAERS or PANAMARENKO. WANDERLUST is conceived and curated by Prof. Hans de Wolf from the Free University of Brussels (VUB).
WANDERLUST is probably one of the most beautiful words in the German language and is universally understood as referring to a profound desire to leave the conventions of everyday life behind, in order to discover other cultures and other habits. It could be said that WANDERLUST is as old as mankind, however it obtained a particular meaning when at the beginning of the 19th century the artists of German romanticism embraced it as a key concept in their struggle against the cold heritage of rationalism and the age of enlightment.

WANDERLUST is for instance what brought Francis Alys to Mexico City, and although nowadays he is creating his work in such difficult places as Afghanistan (his contribution to DOCUMENTA this year), Mexico became his safe haven, and an unlimited source of inspiration for his work; a place where, according to one of his famous drawings, everything goes and even goes fine… as long as he is walking. Moving, as a primarily condition for opening the artist’s mind, making him accessible for the poetry that is around, and that nobody ever noticed before, is also fundamental for the mindset of Honore d’O. During the Venice Biennial in 1999, both d’O and Alys entered into the city at the same day, but by other means of transport. During three days they walked on looking for each other. The first carried the lower part of a Tuba Helicon, the other the upper part.

For the WANDERLUST exhibition in Seoul, d’O created a spectacular installation piece that became the icon of the poster. Laying on the water, the pedestrian strip not only suggests the desire to reach the other side of the river, it also brings the WANDERLUST idea on a mental level and refers to the old European tradition of Christianity, where walking on the water is a matter of inner conviction.

This exhibition in Seoul could not pass beside the inventive genius of PANAMARENKO.? For more than forty years the artist used a scientific and technological knowledge in order to discover the most exiting devices that would all have been extraordinary inventions, if only they had worked. For the first time in Korea the exhibition contains some of his work in robotics and a series of plans and designs.

WANDERLUST can also be experienced as a necessity to travel away from the present and the oppressing stupidity of society by the mere force of the artist’s imagination. It is in this sense that the spectacular Jardin d’Hiver (Winter garden) by Marcel BROODTHAERS has to be understood. Composed out of domestic palm trees, modest garden chairs and exotic pictures found in an illustrated encyclopedia, this installation accompanied by a film and melancholic musical score is focusing on the difficult position of the artist as a mediator society. This type of installations has been, and still is, highly influential on several generations of artists in Europe.
The work of Joelle Tuerlinckx reflects a similar mindset. As an artist Tuerlinckx is trying to constitute the basic principles that connect our mind with our environment. In the exhibition two of her major systems (and obsessions) are brought together for the first time: stones and birds. They are installed as representative for two different instruments to investigate the world.

The WANDERLUST exhibition comes with a wide variety of documents, objects and artworks that help to contextualize and deepen its basic arguments, including original artworks by Duchamp and Boetti, documents on Goethe, Sterne and Klebnikov. May it lead to a profound Korean WANDERLUST experience.