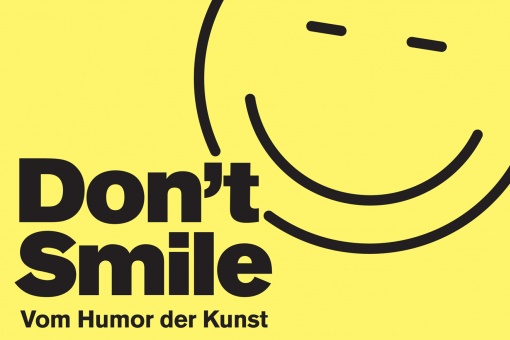 « Comedy is simply a funny way of being serious. » Sir Peter Ustinov

The exhibition « Don’t Smile », sets out to track humour, the trippingly light kind, the roguish, the dry, as well as the self-reflexive. Humour that examines language, logic, society, the day-to-day and the art system both gravely and with tongue in cheek.

What is it that distinguishes humour? How is it expressed? In the artworks on show, it is sometimes the encounter between different worlds and value systems – such as everyday reality and intellectual imagination – that initiates comedy. Or it is a shift that transfers things from their frame of reference into a new meaning, thus triggering smiles. It is especially the overlapping of verbal and visual levels that conjures an open and humorous way of seeing things. And despite the comic level, great seriousness underlies the works on exhibit.

The exhibition has been organized in close collaboration with the artists Josef Dabernig, Rainer Ganahl, Bethan Huws, Anna Kolodziejska, Vaclav Pozarek, Kay Rosen and Eran Schaerf. Each artist has created an atmospheric and compact narrative specifically for « Don’t Smile ». The overall effect is of an edginess spanned between multifaceted and challenging commentaries that incite ulterior and subtle, indeed enigmatic, humour.

Interwoven into the exhibition are a selection of historical artworks that set the tone and the frame of reference. Of note are especially Marcel Duchamp, René Magritte and Kurt Schwitters. As significant forefathers from the beginning of the 20th century, they still today pose valid questions on contextualization, on compositional elements, on language as a medium of the visual arts, on wordplay, on the mutating image, as well as on the art of thinking. In addition, with John Baldessari, Joseph Beuys, Marcel Broodthaers, Robert Filliou and Anne Marie Jehle, we find exemplary positions of the “see” change in 1960s art. “All artists make artworks” as Bethan Huws puts it in one of her word vitrines. But is that really so?

In to the heart of Berlin’s government district, where decisions on the future of Europe are being negotiated, stands the Haus der Kulturen der Welt, formerly the Kongresshalle (congress hall): an architectural icon and relic of post-war modernity. The building and its history provide the point of departure for Between Walls and Windows. Architektur und Ideologie.

Only this autumn, from the 1st to 30th of September, the architectural monument, understood as an ideologically determined sculpture, will be returned to its original condition. With free admission and access from north, south, east or west, the exhibition promises new insights and perspectives on form, function, and history.

The project places the local history of the former congress hall in a new global context and casts a spotlight on the Haus der Kulturen der Welt as a sculpture. Curator Valerie Smith, head of the department of visual arts, film, and digital media, presents ten new site-specific productions by international renowned artists and architects, which turn the interior and outdoor spaces of the building into stages that question all that « architecture » can be.

The 2012 Pritzker Architecture Prize winner, Wang Shu, together with his wife and partner Lu Wenyu, will use for their Tile Theatre approximately 60,000 traditionally manufactured Chinese roof tiles recycled from their work for the 10th Venice Biennale of Architecture in 2006, thus creating an inhabitable pavilion on the roof of HKW. On the occasion of a visit by Kim Il-Sung to Indonesia in 1965 the former Indonesian President, Achmed Sukarno, presented his state guest with a specially hybridized orchid variety, which he insisted on naming « Kimilsungia. » Since then, the tradition of dedicating orchids to heads of state and political dignitaries has extended far beyond North Korea. At the main entrance of HKW, Arno Brandlhuber represents us to orchids as the transmogrification of power. Nowhere is ideology and architecture so closely linked than in embassy buildings. Terence Gower presents his research on US foreign policy as seen through architecture set in the stylized 1950s lounge interior of HKW.

In 1974, at the outbreak of the Carnation Revolution in Portugal, the 4 Estações Hotel in Maputo, Mozambique, was nearing completion. After remaining vacant and unfinished for 33 years the building was demolished in 2007 in order to make room for the US embassy. Ângela Ferreira follows the traces of destruction and reconstruction of ideologically motivated foreign policy both in Africa and beyond. The architect Hugh A. Stubbins saw his Kongresshalle, with the auditorium as its centerpiece, as the embodiment of freedom of speech and opinion. The theme of Iñigo Manglano-Ovalle installation is the influence of acoustic and spatial staging on the power of the spoken word. Immaterial structures also make a building into what it is. Marko Sančanin has improvised a ‘crypt’ of memories, of discarded or forgotten relics relating to the former Kongresshalle, arranged around an architectural drawing of the roof construction on a hidden wall of the HKW.

Eran Schaerf examines the constitution of the mass media and the space produced by it. The borders between fact and fiction, sender and receiver, user and author, become blurred questioning the production of space by means of language. From the roof terrace of the HKW there is a view of the Reichstag and the Kanzleramt (Chancellery). These two massive symbols of political power loom up as if they were cruiseliners on the brink of collision. The HKW roof kiosk drifts between them like a life raft. Here Studio Miessen creates an informal place of assembly. The kiosk changes from a hermetic vitrine to a walk-in display case. In the cloakroom the internationally operating architecture group, Supersudaca (sudaca: Spanish insult for Latin American immigrants) will stage a parody of Credit Rating Agencies, their influence on market dynamics and real estate investments taking up the cause of greater social justice.

Another way of approaching architecture and ideology is represented by the Initiative Weltkulturerbe Doppeltes Berlin (Initiative World Cultural Heritage Double Berlin), which aims to have the architectural ‘competitions’ of the once divided Berlin listed as UNESCO World Cultural Heritage. The congress halls in the Tiergarten (Haus der Kulturen der Welt) and at Alexanderplatz (BCC) are prime examples of dualling architectures: between 1945 and 1989, state, residential and cultural buildings were constructed in the divided Berlin to reflect the ideology of the respective systems.

The extensive accompanying program explores the dimensions of architecture as an instrument in the history of architecture, philosophy, and politics and includes speakers and experts such as, Louisa Hutton & Matthias Sauerbruch, Ashkan Sepahvand, Joanna Warsza, and Karin Sander. 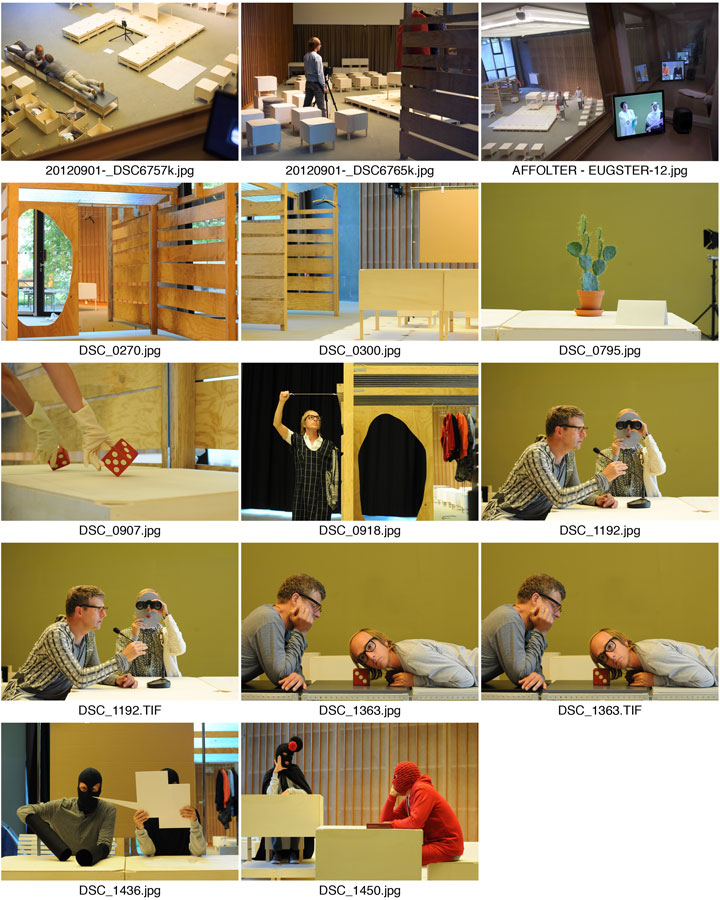 Eran Schaerf’s project examines the constitution of the mass media and the space produced by it. The project offers users an Internet archive (fm-scenario.net) containing audio modules such as listener calls, features, and news, where they can compile stories. One such compilation will form the initial scenario for Schaerf’s installation. Located in the interpreter booths of the main conference room, an architecture which reflects translation processes, the borders between fact and fiction, sender and receiver, user and author, become blurred questioning the production of space by means of language.

Eran Schaerf (*1962 in Israel) is a Berlin-based artist with an academic background in architecture, urban planning and photography. His practice focuses on architectures of discourse in the intersection of fashion, mass media, language and the built environment. It interweaves historical and contemporary political narratives in print, in space, on air, and – often in collaboration with the author and philosopher Eva Meyer – in film. His work has been shown widely in exhibitions such as the 54th Venice Biennale (2011), Skulptur Projekte Münster (2007), and Manifesta 2 in Luxemburg (1998).

fm-scenario – where palms stand – mask – delay is a project in the framework of fm-scenario – The Listener’s Voice, a project of a production e. V., Berlin and Bavarian Broadcasting Corporation / Dept. Radio Play and Media Arts in cooperation with Hartware MedienKunstVerein, Dortmund; Haus der Kulturen der Welt, Berlin; Les Complices*, Zurich; the Museum für Konkrete Kunst, Ingolstadt and the ZKM | Center for Art and Media, Karlsruhe. This project has been made possible by the generous support of the German Federal Cultural Foundation, 2012-2014 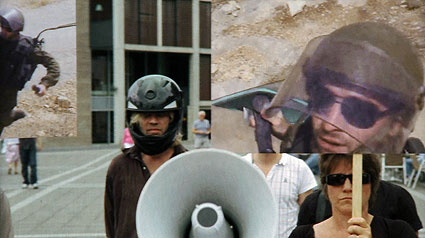