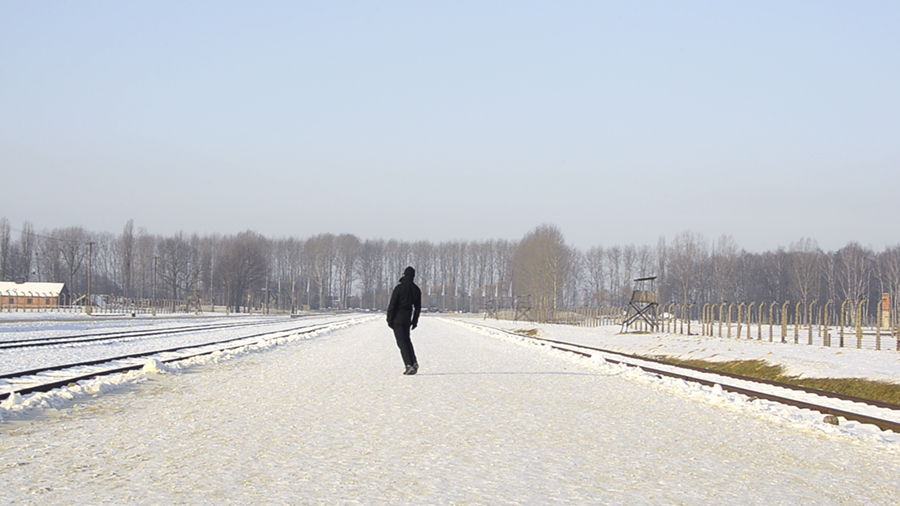 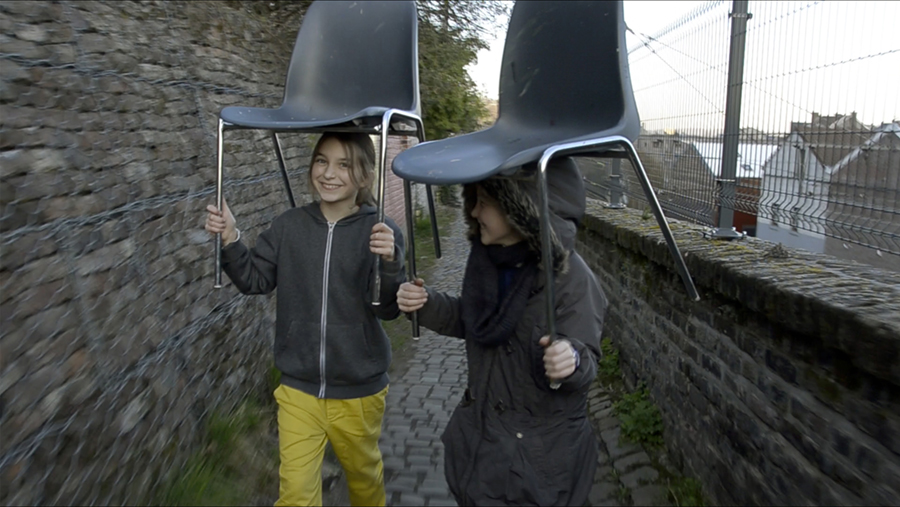 The Day the Clown Cried, a diptych by Charlotte Lagro

“Jerry Lewis’ The Day the Clown Cried, writes Jean-Michel Frodon 1, is a dream movie, a nightmare movie to be more precise. It tells the story of a German clown, Helmut Doork, played by Jerry Lewis, who ends up accompanying Jewish children into a gas chamber at Auschwitz. It is a movie that is all about laughter, continues Frodon, what it is to make people laugh, to be funny, to be professionally funny: a subject which Joseph Levitch, better known as Jerry Lewis, was quite familiar with in 1971 when he embarked upon this project, after a more than 30 year-long career as a stand-up comedian, actor and comic director.”

The Day the Clown Cried indeed occupies a unique place in the filmography of the Holocaust. Going beyond the initial concept of screenwriters Joan O’Brien and Charles Denton, who initially wanted to write a film about the Holocaust with a clown as main character, Jerry Lewis wanted to turn this film into a “paradoxical meditation on comedy, spectacle … and himself.”
Helmut, played by Lewis, is a German clown, a total disgrace of a man, who is fired from the circus he works for. During a night of heavy drinking, not for any ideological reasons but out of spite, he spits on a portrait of Hitler, for which he is sent to a political prison camp. Helmut, whose desire to make people laugh at every opportunity has always been irrepressible, wallows in his shamed dignity and contemptuously refuses to entertain his fellow prisoners. Before long, however, he accepts to perform – at the request of SS officers and mainly because he thinks he can gain personal advantage – for Jewish children held in the neighbouring camp. The avowed aim is to keep them quiet until they suffer the fate to which they are destined. “Helmut , writes Frolon, becomes their guardian and even their shepherd, a shepherd who will accompany his flock into death. At the last moment he decides to stay with the children and enters the gas chamber with them, leading them like the Pied Piper of Hamelin, with the essential difference that he choses to die with them.”
Jerry Lewis wanted to make a film about the “possible manipulation of laughter, or more broadly of the spectacle, by any power – not only by those who rule by terror.” However, for a variety of reasons, the film was never made: there are many disagreements between the producer, writers and Lewis himself, the project runs into budgetary difficulties, and the film rolls are seized by creditors. All the while, a hostile campaign is conducted against film, even before its release in the United States.
The real and fundamental reasons are obviously different, believes Frolon: “The Day the Clown Cried” does not conform to what is considered to be a “Holocaust movie”, namely both serious and sentimental, nor to what we consider to be a Jerry Lewis movie, a funny movie. A dissonant tone that would probably have been its ultimate strength.

Since 2013, an excerpt from a television programme has been circulating about the film and the filming in Paris of the first scenes of the scenario (in which have participated several French actors, performing for free in tribute to the great comic, including Pierre Etaix in the role of the new star clown who supplants Helmut). These images, now posted on the Internet, have stirred Charlotte Lagro’s imagination; they will become the basis for a project which the videographer has given the same title of Jerry Lewis’ unfinished film, a film, or rather a diptych, that evokes, through three generations, all the power of the performing arts in the face of the barbaric legacy of the Holocaust, in the face of the unspeakable.
As such, Charlotte Lagro proposes the mime Dönci Bánki, choreographer and director of Hungarian and Jewish origin, to film him at the Auschwitz-Birkenau concentration camp in Poland. In this way, she organizes the return of the clown in Auschwitz and he, solitary, without any witnesses in or around the camp. Here, he will dance, like an ephemeral black shadow in the white snow, or evoke through his contortions the relentless mechanics of bodies. Outside by day, his gestures dialogue with the birch trees along the camp, the Birkenwald, the birch forest that gave Birkenau its name. “The term refers to the meadow where the birch trees grow, so it is a word for a place as such, writes Georges Didi-Huberman. But it could also be – already – a word for pain itself (…) The exclamation au!, in German, corresponds with the spontaneous expression of pain.” Dönci Bánki dances among the trees and – again, I quote Georges Didi-Huberman –, “these tree trunks are already like the bars of a vast prison, or rather like the wire mesh of a harrowing trap » 2.
Dönci Bánki’s performance is like a marriage of shadows. Indoors by night, it is transformed in mechanical and painful, burlesque contortions. Sporting a bowl that functions as a helmet, but also as a mask, he wanders amongst the demons that accompany him, his movements are those of the inarticulate and fatal, he is mechanical and primal, a puppet of the theatrum mundi, both executioner and victim. In this way, grotesquely helmeted or masked, Dönci Bánki revives the spirit of the Dada performance, which we can imagine being witnessed in Zurich while the din of the world and the First World War already rumbles in the background.
To these performative fragments, the alternating day and night, Charlotte Lagro adds very little. Two or three shots suffice to identify the location, the railway tracks that lead to death – Dönci Bánki dances in between them as if it were an ultimate conjuration – the entry gate of the camp, barracks looming in the night. Two or three others are additional shots derived from the Jerry Lewis film.
A makeup scene, a close-up of the face of the clown, a few gestures from a performance, a classic in the genre, the clown trying to light a cigarette in the flame of a candle that goes out whenever he comes close. I think of these words spoken by Reverend Keltner, the cellmate of Helmut the clown:
“When terror reigns, a burst of laughter is the scariest sound of all”. 3
This film by Charlotte Lagro could stand on its own. The videographer, however, decided to make it the first part of a diptych. At Auschwitz, she filmed during winter, in Liege, in Belgium, she will film in summer, on the occasion of a residence in an art centre in the Meuse city. She films carefree children playing, strollers who walk at the foot of the hills. And most of all, she films Elise and Clementine, two girls who play Ukulele, who sing, alone or together, that the Lion is dead tonight, the song by Henri Salvador, with its gazelle and its deep jungle, and other children’s songs as well.
The two girls appear on a terrace, a gazebo, with a panoramic view of the city. Below, there is a railway, passing trains; the rumbling sometimes drowns out their melodies. They are on the hillside and above them there is the Citadel of Liege, with its execution yard, its Block 24 where under the occupation members of the resistance and patriots were locked up before their execution or deportation to the death camps, and where in turn the occupants, the unpatriotic and collaborators were detained during the liberation in September 1944. Both films mirror, complement, confront each other. Charlotte Lagro chose simultaneity over succession. The gaze, then, glides from one screen to another, from winter to summer, from day to night, from the railway of death to the one of life, from the performance of Dönci Bánki to that of Elise and her girlfriend Clementine, from the Auschwitz birch trees to the hills of Liège, from horrible silence to the carefree children’s voices, from one time to another, lead us into the present. Projected in a loop, the two films do not run synchronously.
In this way, the succession of loops multiplies the gliding gazes, while the soundtracks interact continuously; the composition by Jos Neto supports the performance by Dönci Bánki, the children’s songs and the rolling trains.

Elise and Clementine are old enough to go see clowns. In Liège, the circus stops regularly on the public square, close to their terrace and the hillsides of the Citadel. During her residency, Charlotte Lagro discovered in the archives a photo taken during the Liberation, the haggard faces of German prisoners and Gestapo detained at the Citadel. She has given enlargements of this picture to Elise, Clementine and a few of their girlfriends. And they have transformed them, disguised them with their colour crayons. In clowns under rainbows.